The rituals of Dziady/Dzyady (‘Forefathers’), which are still celebrated in Belarus – Dzmitrauskiya Dzyady in the autumn and Radaunica in the spring – have long been reduced to food offerings and drunken revelries. The ancestor feasts of this kind are described in the Preface to the Kowno-Wilno Forefathers’ Eve by Adam Mickiewicz, who witnessed them and who, with apt intuition, reconstructed them in full in his play as a ritual séance involving the conjuring of spirits and mutual assistance between the living and the dead. Mickiewicz was right: to witness ancestral rituals as complete as these, one needs to travel to the islands and lands of the New World: Haiti, Cuba or Brazil.

The Haitian cult of Vodou is entirely manistic: even its name comes from the word vodũ, which in the language of the Fon people of Benin and Togo means ‘spirit’; the genealogical lwa (spirits) that come to possess the dancers are deified ancestors. The lwa associated with death are called Gede. They manifest themselves en masse on 1 and 2 November. Disguised as undertakers, they strike terror in people, but also provoke laughter with their obscene dances: the spirits’ eccentric behaviour mocks death, which chimes in well with Bachtin’s symbolism of laughter.

Vodou is an Afro-Haitian trance religion. The name is derived from vodũ, which in the language of the Fon people who inhibit Benin and Togo means an invisible, dangerous and mysterious power. The spirits that appear during the rituals are called loa or mistères, or simply lespri (‘spirits’).

The Haitians believe that the spirits they summon arrive from Ginen, Guinea – the mythical Africa, the land of the ancestors. They descend to earth down the centre post, or potomitan, which stands in the middle of the temple – ounfò. The beacon that calls them is vèvè, a diagram drawn on the floor by the priest by strewing flour around the post. There is also a song and a rhythm struck by three ritual drums called maman, segon and boula. The first one, ‘mother’, is the most important one, since its syncopations make the participants enter the ritual trance. The beat is also marked by a ritual rattle, ason, which the priest (oungan), or a priestess (manbo), shakes.

One ethnographer called Vodou a ‘religion of dance’, for it is during the dance in a temple that the initiates, or ‘servants’ (ounsi) are mounted and are said to be ‘ridden’ by loa, to whom they are married. The spirits form a number of pantheons, nanchon (from ‘nations’), of which two are the most important: Rada and Petwo. The Rada loa, who are more friendly and beneficent, are gods of the Fon people, while the Petwo loa, more fiery and seeking vengeance, come from the beliefs of the Arawaks and the Caribs, Amerindian peoples that have been wiped out. Father Legba is called upon at the beginning of the rite, as it is him who destroys the barrier separating people from the gods. He also protects the crossroads, households and temple entrances. Gede are spirits of death, led by Bawon Samdi in a black tailcoat and top hat, the guardian of the cemeteries and a clown who dances in a lewd and shameless manner. Danbala-wèdo, with two serpents and a rainbow as his symbols, stands for the source of life and vital energy. Agwe-tawoyo is the god of the seas and protector of fishermen, Ogou is the deity of fire and wars, Kouzen Azaka is the patron loa of farmers, Loko – of plants and vegetation, and Marassa are the divine twins. Ezili, who is the goddess of beauty, sensuality and love, though seductive and flirtatious, is considered a virgin who carries all of the world’s suffering in her pierced heart.

Ezili is a good example of the ambiguous aspect of loa. As Ezili Freda, she is syncretised with the Mexican Our Lady of Sorrows (Mater Dolorosa del Monte Calvario), holding a pierced heart in her hand, and as Ezili Danto, she is identified with the Black Madonna of Częstochowa, holding Baby Jesus in her arms. She does, however, also appear in the more vengeful form as Ezili Zye-Wouj, the patron of prostitutes, who easily gets angry, is spiteful and blood-thirsty, as her ominous alias suggests, and even shows a proclivity towards cannibalism.

And such is, in fact, the whole Vodou religion: ambivalent, bitter-sweet, encompassing all aspects of human experience. It is surrounded by the aura of magic, sometimes quite ill-famed because of wanga, bottles or charm packets used for casting bad spells, zonbie, the living dead used by sorcerers as slaves, and bòkò, the sorcerers themselves. It is, however, worth remembering that equating the Vodou religion with the black magic of voodoo is a propaganda technique employed by the former French colonialists and American occupants, and a projection of their own fears, most notably – the fear of the vengeance of the slaves. 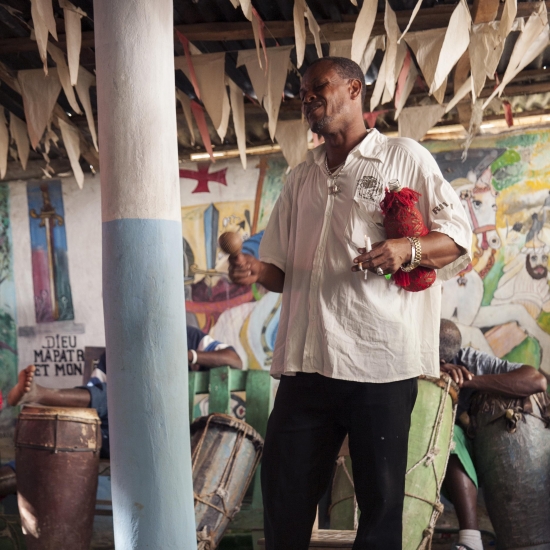