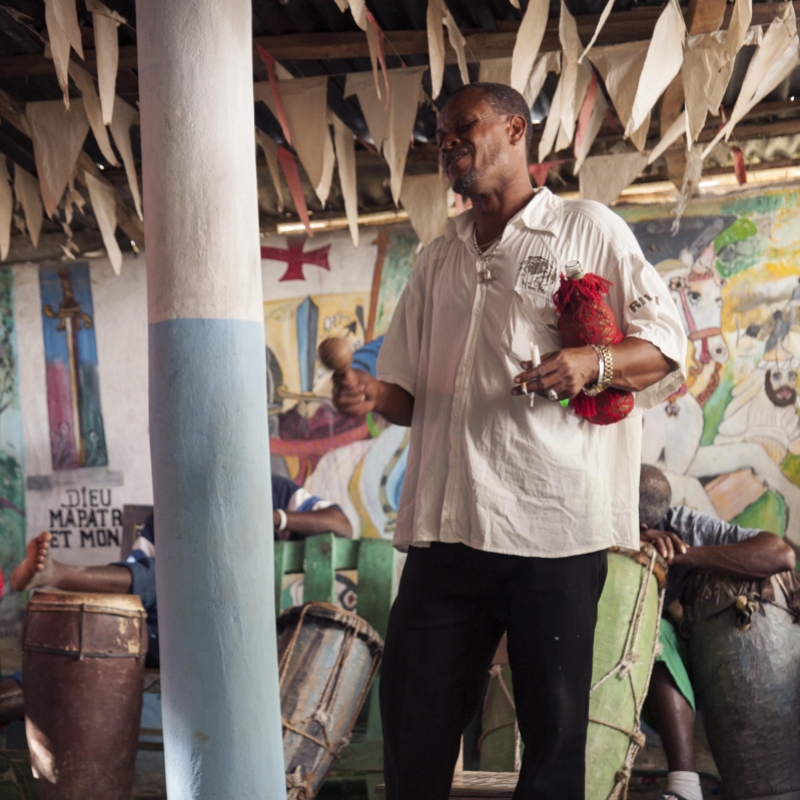 Joseph Auguste Louis is a houngan (Vodou priest) born in 1967 to Renevia Moise and Clovis Louis in the village of Cazale, Haiti. In fact, he was born in roughly the same place where today he runs his peristyle (Vodou temple) in the neighbourhood of Grand Chemin.

Louis had from an early age been aware of his community’s links to that far-away country of Poland or, as they know it in Haiti’s Kreyol language, Lapoloy. The old people would talk about their Polish forefathers and, when Louis was 14, his neighbour, the well-known houngan Amon Frémon, came back to his village, regaling his neighbours with exotic and fascinating tales of Vodou ceremonies in the green forests of Poland, vodka-soaked evenings during which strange wasp-like boats would take him and his good friend, the Polish houngan Jerzy Grotowski, along rivers to other sites of worship in the verdant Polish landscape.

When he became 18, Louis started having visions in his dreams where spirits such as Simbi, Ogou Feray and Ezili Dantho would pass important messages to him. Not a year later, these visions came to him in his waking life and he knew he was destined to serve the loa (Vodou Gods/spirits). He was initiated in the secret ceremonies that accompany such liminal transitions and finally wed in cosmic marriages to both Ezili Freda and Ezili Dantho. This means that on days reserved for these Goddesses (Tuesdays and Fridays for Dantho and Tuesdays and Thursdays for Freda), Louis would sleep in a special room dedicated to them, and will refrain from sharing the bed with his common law wife.

On 6 January 1990, Louis became an official houngan, and he would often be asked by both his neighbour Amon Frémon and his uncle Milfrence Joseph, a well-respected houngan in the larger town of Cabaret, to assist them in their ceremonies. It was this practical apprenticeship that gave Louis a depth of knowledge in the ritualistic and cosmological aspects of Vodou that is acknowledged throughout the surrounding regions.

On 25 January 1999, Louis founded his societe vodouizan (Vodou society) Rasin San Bout (Roots Without End) on the land of his forefathers. The Society serves all the Gods, but is primarily dedicated to the ‘hot spirits’, the more martial spirits that burst to life out of the horrors of Haitian Revolution, belonging to the Nanchon Petwo (Petro Rite). Having achieved the highest grade of houngan possible, that of the Empereur, Louis is widely considered to be among one of the most capable of his peers, having treated and healed thousands of people in the throes of spiritual need and anguish.