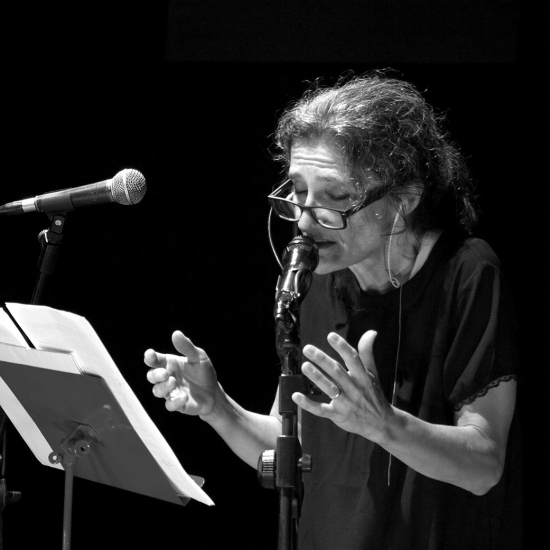 The doula è is the servant girl who listens.
This is the first movement.
Chekhov’s little mare, the only one who is able to listen to and sympathise with the old sledge-driver Jona Potàpov, one week after his son has died, is the second movement.
In the stall with her, the father finds a way to sing his own sorrows.
Ewa is the third movement.
A recognition process is underway in Bosnia. Almost thirty thousand people disappeared during the war in the nineties, and not all of the bodies were found in the mass graves.
It was necessary to descend, to raise, to recompose, to recognise and to assign names, in order to give the dead back to their families. And to bury them.
This has been Ewa’s job, for many years.
Faced with the tragic force of reality, many questions arise in theatre.
What does it bring to light?
How could one answer this question?

In THROAT (GOLA), theatre comes into play in senses that are not only aesthetic. It is a question of touching, with the haptic glance of tragedy, the hero’s grief. Of placing oneself alongside those who act and suffer. Of giving them a present, which is the time of theatre, and giving them a voice, the artist’s voice, that binds together listening, pain and a cure in one single body.

A workshop will precede the staging of THROAT, a performance in three movements inspired by Chekhov’s short story Misery. The text will become a starting point for exercises aimed at making its words rise up, within a seemingly empty space. Proceeding from the bottom upwards, this movement will proceed from the depths of an abyss to the surface of a place, theatre.

Because Chekhov’s words stick in the throat, and wait to be liberated from the inertia of the written page. The Workshop is intended for all those who wish to have an experience of theatre. There is no age limit. Even children can participate.